This entry was posted on 6th November 2017 by Philip Boerma.

Plastic fiber pollution of our drinking water has recently come into the news. Whereas earlier concerns were about plastics in the oceans it now appears that micoplastics have entered the food chain on a grand scale. This microplastic contamination has found it's way into drinking water around the globe. A shockingly high 83% of the tap water samples collected from around the world were found to be contaminated with microplastic fibers. We have received many questions about whether the Black Berkey filters are able to remove this plastic fiber pollution. 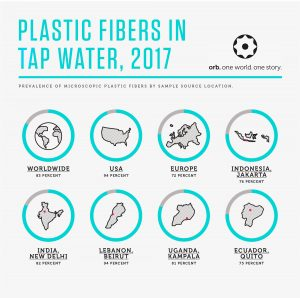 An extensive investigation of plastic fiber pollution in drinking water found that these analyses caught particles of more than 2.5 microns in size,” 2.5 microns is 2.5 micrometers. A micron is an abbreviated term for a micrometer which is a millionth of a meter (1/1,000,000 meters). For size comparison, a human red blood cell is about 5 microns across and a human hair is about 75 microns across. Working down to a smaller scale 2.5 microns would be 2,500 nanometers.

The Black Berkey water filters can reduce viruses down to the nanometer scale, in the tested range of 24-26 nanometers. 24-26 nanometers is .024 to .026 microns…in other words, much smaller than the plastic fiber particles being found in drinking water. The fact that Black Berkey water filters have been tested to remove viruses in the nanometer range suggests that contaminants much larger in size, such as plastic fibers would also be removed. Nonetheless, since actual testing of the Black Berkey filters for plastic fiber elimination has not yet been conducted, Berkey cannot yet officially make that claim. Once independent lab testing has been done we will publish the results as soon as they become available.

A Berkey water filter system is the means to protect yourself and your family against the continuing degradation of our commons.